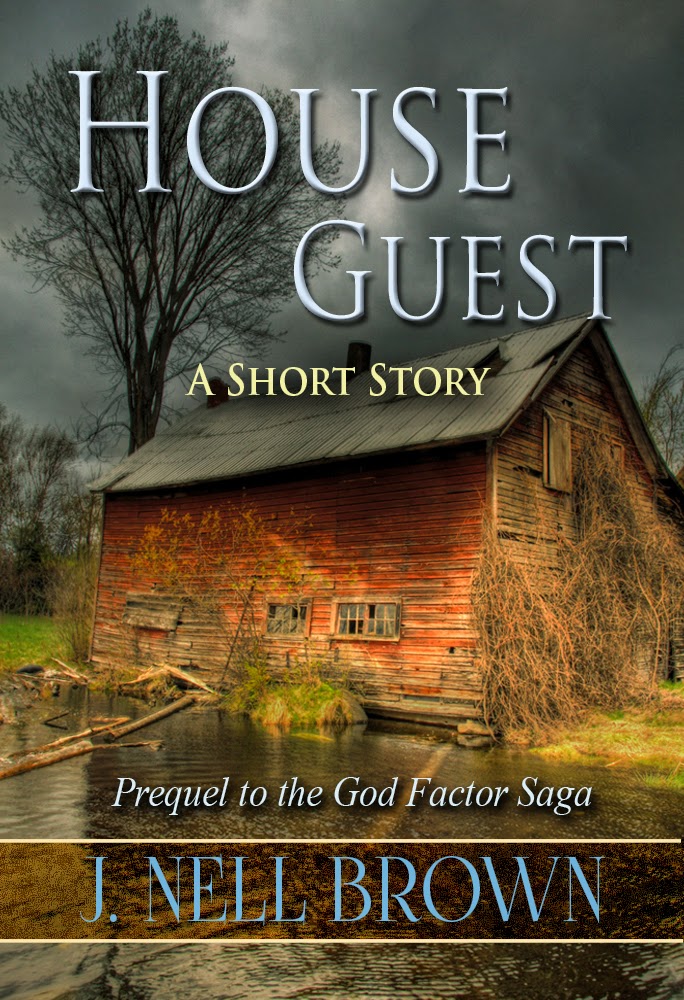 House Guest is the Prequel to The God Factor Saga, a seven volume E book serial by J. Nell Brown.

Every villain has a beginning, and Asher Bushcroft's beginning started the day Adolf Hitler declared war on the United States. He barters with a dark force in order to win the affections of a popular girl at school. The dark force vows to assist him in his lustful adventure in return for a favor: He must stop two children who haven't been born yet because their Divine missions will change the world and shatter his master's plans to dominate earth. Never fear, each villain also has an ending, when he must give an account for his evil deeds before the Almighty.

Begin the adventure of The God Factor Saga. This saga is a romance, suspense, thriller, adventure, apocalyptic, and inspirational journey, tucked into the stories of children who grow up to be men and women with Divine purpose.

1977
My name is Nomed, and I’m a houseguest. I don’t possess a surname because my ancestry is complicated, but my host, Asher Bushcroft, is a simple man. Thirty-six years ago, he invited me to be his houseguest, or maybe I invited myself. Details don’t matter. He’s obedient to those he fears, so he’ll tell our story.
I can be vulnerable, so I’ll share a secret—I’m obsessed with two kids, Daniela Cavanaugh, an American, and Cillian Finn, an Irish-Scott. They’re not related, at least not yet. One can see by the fact that they possess surnames that they’re simple like Asher.
Don’t think me petty. I’m not obsessed with Daniela and Cillian for simple reasons. Neither is popular at school, rich, nor cool—quite the opposite, but my boss believes their futures will be complicated and powerful and could potentially wreak havoc on my world. We won’t talk about my boss, because I’m on vacation from my hellish job to talk to you.
But, I’ll share my boss’s final instructions—murder Daniela and Cillian before they accomplish the mission. Death and I are great friends, so I intend to have fun while carrying out my mission; but I needed help—a host—so I found Asher. He obliged in exchange for a favor.
I wanted to be Daniela and Cillian's houseguest, but some meddling human prayed for them, protecting them from my visit. Then, Legna, Yahweh's groveling servant, blocked my visitation.
There’s no need to tell the kids’ stories, they’re recorded in Frozen Prayers, Blood Moon Relics, Autumn Rains and a myriad of other books in the God Factor Saga, books bragging on their feats and strengths. I grind my teeth when thinking about both of them, but a warning: I’m determined that they won’t survive my schemes.
Here’s my friend Asher. He’s human, so earthlings acknowledge his existence but deny mine. That’s okay. There is no war when the victim doesn’t know he has an enemy.
I smile widely, revealing my glee. 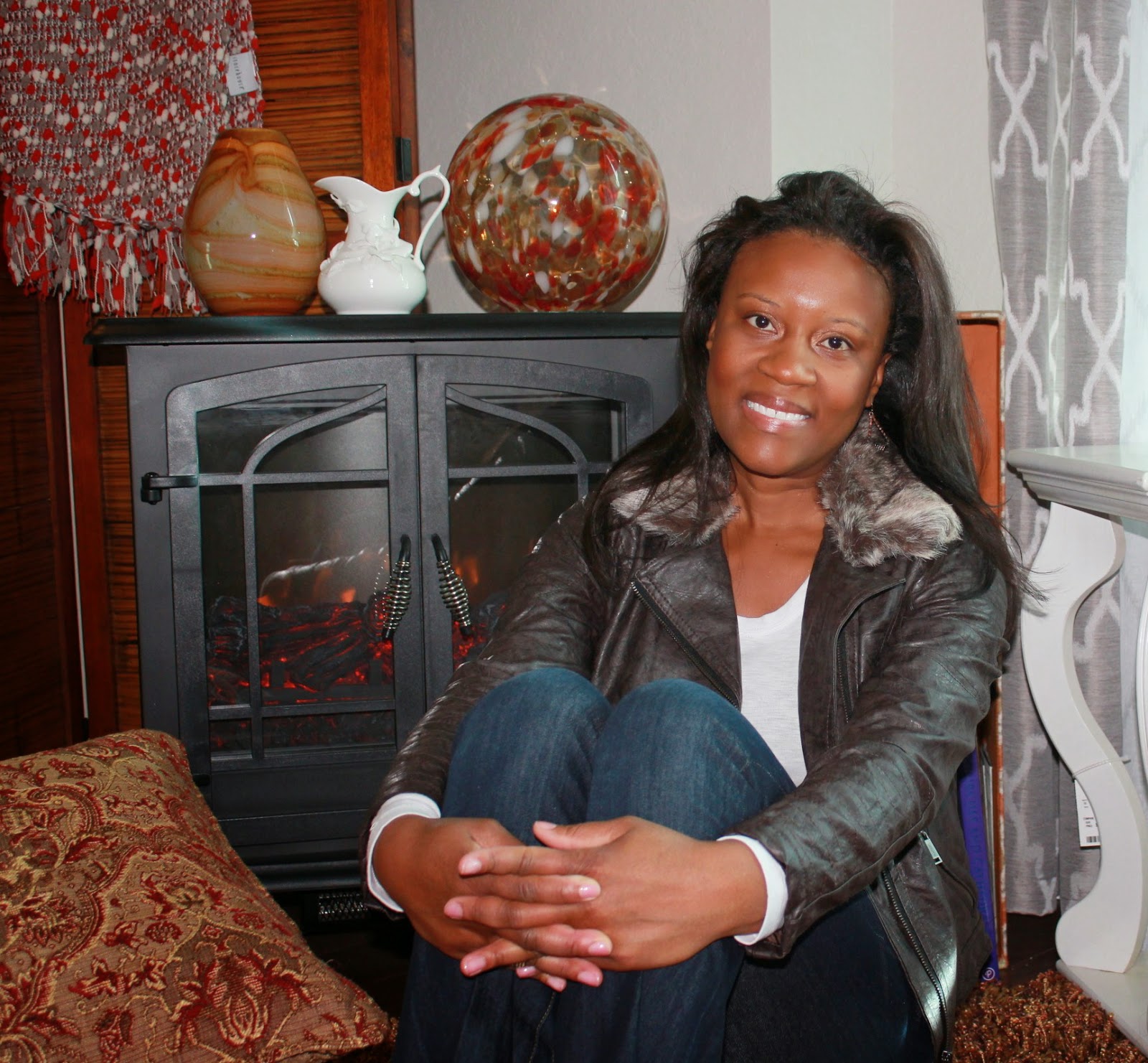 J. Nell Brown, daughter of a chaplain and a teacher, is a Florida native.

Her relationship with Yahweh mixed with experiences in life, travel, extensive Bible study, and peoples' stories blend together to form characters, plots, and geographical setting for her novels. An involuntary insomniac, Brown practices medicine and writes in her free time.

She is a self-proclaimed nerd and loves all things scientific. Her love of science is demonstrated by her research at Los Alamos National Laboratory, the site for the development of the atomic bomb. She graduated with honors from The University of Florida (U of F) College of Agriculture and received her Medical Doctorate from the same. After completing an anesthesia residency at The University of Chicago Hospitals, she practices in Florida.

Her heart overflows with compassion for hurting people, particularly children. A portion of the proceeds of her books will go to help children.

Kindredfriendships.com, a project designed for adventurous women in need of spiritual renewal, was founded by J. Nell Brown in 2008.

Bestseller on sale! 'The Labyrinth Wall' by Emilyann Girdner Araina’s isolated teenage life is forever altered when she witnesses a man emerge through a rippling wall into the dark labyrinth she calls home. As a result of the stranger’s arrival, Araina’s Creators have unleashed a series of magical attacks using the labyrinth against its inhabitants. Now Araina must decide if she will trust potentially deceitful allies in order to reach safety on the other side of the labyrinth wall.

The Labyrinth Wall is the story of a young woman who discovers that although labyrinth walls confine her and her enemies try to repress her, the power of hope can set her free.

Young Adult Fantasy Novel. Hit #2 on the Amazon Best Seller list in its category the day after release and hit #26 on the Top 100 Amazon Free Best Seller List. Though she was born in Germany and raised in Turkey until the age of five, Emilyann Girdner spent the majority of her grade school years in Tallahassee, Florida. She discovered early she had a love for stories. Reading books, watching movies and then acting them out with friends or toys gave living an extra flavor. This is likely why she spent the first part of her college career studying Creative Writing, before switching to Graphic Design and then graduating with a BFA in Digital Art from Missouri State University in 2011. Her writing has appeared on websites and blogs including Center for Work Life, Easter Seals Florida, MU Museum of Art & Archaeology's Musings and Examiner.com. She is best known for her Amazon Best-Selling novel, The Labyrinth Wall. Emilyann is now living and working in Florida.

Given her three focus transitions as an undergraduate, it isn't a shock that she is a multi-medium lover, exploring writing, digital art, photography and design. She finds that her creativity is most fluent when given the opportunity to bounce between artistic outlets.

To truly understand this Author, there are two things to know about her. Emilyann hopes to share a love for others and God in all she does. She believes that imagination sparks beauty in the soul.