Read an excerpt from Silver Moon by Jenny Knipfer 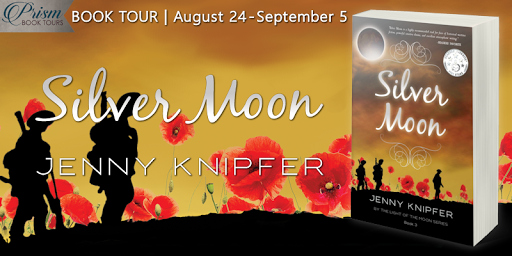 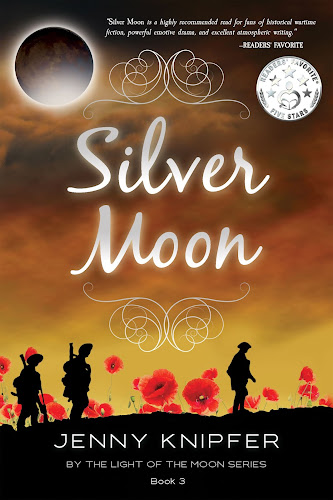 A tale of courage and hope in the darkest of times...
Silver Moon, the third book in the series: By the Light of the Moon, paints a stunning and poignant picture of life on the home front in Webaashi Bay, Ontario, and of three men who are a part of the Canadian Expeditionary Force during WWI.
Shamed into joining the war, the tide turns for Luis Wilson when he is steered into the depths of espionage. Injured and presumed missing, will he lose his heart to the very woman who presented him with a white feather?
Oshki and Jimmy offer a grim perspective on life in the trenches. They despair of ever returning home to the women who hold their hearts.
Meanwhile, Lily fights for the cause in her own way and rallies the female troops at home as prejudices run high and the local cafe owner is accused of being a spy.
Will the women of Webaashi Bay receive their men back unscathed? Can the power of love win out over insurmountable odds? All this drama and more plays out under the light of a silver moon.
Fans of WWI historical fiction, Christian historical fiction, and literary fiction will find Silver Moon a moving, powerful read!
Praise for the Book
Taking an original angle on a tumultuous time in history, Silver Moon by Jenny Knipfer is a sparkling slice of historical fiction. Ambitiously detailing a diverse collection of characters, this World War I story bounces across space and time, delicately filled with vivid descriptions, nuanced moral dilemmas, and authentic relationships..." --Self-publishing Review

"I am stunned by the amount of detail the author gave in this single story. On one hand, we have powerful characters... and on the other, we have a plot that demands all our attention. Jenny Knipfer pulls no punches and holds nothing back." --Readers' Favorite
(Affiliate links included.)
Goodreads | Amazon | Barnes & Noble | Book Depository
Read an exclusive excerpt:

Rose Greenwood turned and looked at the café the outspoken, blonde woman had entered. She steadied herself and took courage from the other ladies in arms. At heart, Rose was no outspoken leader like Mrs. Taylor, but she had determination. She did her duty, calling men to fight. Rose thought of the man she loved. She wanted to make sure he had plenty of help so he would come home to her.

She had heard about the white feather campaign one day from a friend and found an article in the paper about it. She had gained more information and got up the courage to ask matron for several weeks off from the hospital to take part in the campaign and travel around the ports to encourage Canadian men to rally to the cause. Matron had been grim and stern, but she’d conceded . . .

“Heavens! Speak up, Greenwood. No one likes a mumbler.”
Margaret Hastings, the duty matron at Victoria General, looked tired. She stood next to Rose while she acquired bedding in the laundry room. “Come, it is late, and I wish for nothing better than a warm sweater, a hot cup of tea, a good book, and a cozy fire by which to read it.”


Rose heard the matron’s words come out longingly but with distinct impatience. She gulped and laid the stack of fresh sheets back down on her pile. She tried not to be waylaid by the matron’s tone.
“I . . . would like to request some . . . time off, Matron.”


“Time off? You just started, my girl.” Matron narrowed her eyes and pinched her lips into a stern expression.


“I know, but it’s for the war effort.” Rose held her hands cupped around her middle. Her fingers toyed with a stray thread on her white apron.

Matron sighed. “And what exactly does this war effort entail?” She paused and eyed Rose with what looked like a tinge of compassion. “I suppose there are plenty of staff with the new graduates, and I could . . . rework the schedule a bit to account for your absence.”

Rose turned full, hopeful eyes towards her overseer. “Have you heard of the white feather campaign, mum?”

“Can’t say as I have.” Matron checked the watch hanging at the junction of her white apron and uniform.

“Well, I’ve read about it in the papers and all. Admiral Charles Fitzgerald from England and a lady author, Mrs. Humphrey, have charged young ladies with the handing out of white feathers to encourage men to sign up to do their duty.” Rose worked to inform the matron without displaying a warble in her tone.

“That is there, not here in Canada,” Margaret pointed out.

Rose was not deterred. “A local chapter has started here. I read about it, and I went to a meeting. A local suffragette leads the effort—Amelia Stowe.” She gained more strength in her voice the more she spoke. “I think it important for women to do their part in the war effort.”

“Yes, well, working here at Victoria General will be ‘your part,’ but . . . I suppose I can hold your spot for you. Just a few weeks is all, you hear?” Matron shook her finger in Rose’s face.

“Thank you, Matron, this means so much to me.” Rose lit up with a smile. Her green eyes sparkled.

“Yes, well. Just mind what I said. When does this campaign begin?”


“Very well. Go about your duties and finish up your shift; it is almost done.”


Rose lessened the intensity of her smile, nodded demurely to the matron, and headed out with the fresh sheets to finish up changing a few of the patient’s linens. She was excited to be doing something so worthwhile.

Rose had met the other ladies at the docks the next week in Halifax and sailed on down the water systems, stopping and transferring vessels as need be. Webaashi Bay had been the most outlying port and their most westward stop. After this, it would be homeward bound. It gladdened her heart. She longed to be home and, to be truthful, to be done with this job. Her expectations had differed from the end results. She’d taken the light out of one too many sets of eyes.

She now dreaded the look on the men’s faces when she pinned a feather to their coat. A vision of the man by the dock this morning, who had been drawing with artist’s coal, came to her. His blue eyes had flashed kind, sad, and so . . . hurt. Her conscience bit at the fact that she used shame as a motivation, but she set it aside. The thought of Henry motivated her, and she would not let him die alone on the battlefield.

(Linked to Amazon affiliate links.)
About the Author 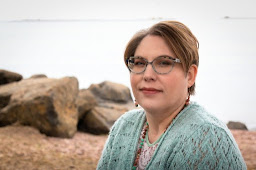 Jenny lives in Wisconsin with her husband, Ken and their pet Yorkie, Ruby. She is also a mom and loves being a grandma. She enjoys many creative pursuits but finds writing the most fulfilling.

Jenny’s education background stems from psychology, music, and cultural missions. She spent many years as a librarian in a local public library but recently switched to using her skills as a floral designer in a retail flower shop. She is now retired from work due to disability.

She authored and performed a self-published musical CD entitled, Scrapbook of a Closet Poet.

Jenny’s favorite place to relax is by the western shore of Lake Superior, where her novel series, By The Light of the Moon, is set. She has self-published the first three books, Ruby Moon, Blue Moon, and Silver Moon, in her four-part series. One more novel to complete the series is planned for 2020. She is currently writing a new historical fiction series called, Sheltering Trees.
Photo Credit: Craig Jentink

One winner will receive ebooks of all three books in the By the Light of the Moon series by Jenny Knipfer (Ruby Moon, Blue Moon and Silver Moon) and a $25 Amazon eGift Card

Open internationally to those who can use one of Amazon's branches
Ends September 9, 2020